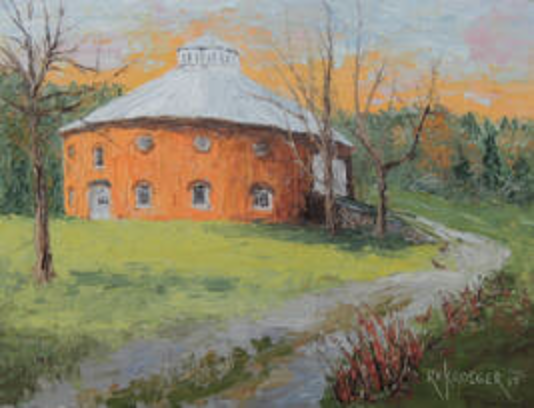 The book, Historic Barns of Ohio, was written by Cincinnati artist and author, Dr. Robert Kroeger. The illustrations in the book are paintings created by Dr. Kroeger using the “impasto” method of oil painting in which the paint is applied thickly with knives rather than brushes, resulting in a painting having many intricate, raised ridges.

Dr. Kroeger began his “barn journey” in the early 2000s following a stay in a rural bed and breakfast in Licking County, Ohio. A nearby lonely deteriorating barn, “Granville Gray”, called out to him. With roof sagging, boards missing, corners slightly tilted, and in obvious disrepair, it captivated his eye. Suddenly a voice whispered, “Paint it and write about it”. The message was like a lightning bolt that hit him between the eyes. Almost immediately, it ignited his Ohio Barn Project, which has taken Robert throughout Ohio where he has painted barns, talked with owners, and written stories about each structure. The stories can be found at www.barnart.weebly.com

He reached his goal of painting at least one barn in each of Ohio’s 88 counties, and this is the basis for the book published in March, 2021. The book contains 135 images, 64 in color. A barn and its’ story from each county help to preserve early Ohio history.

“Barns represent the heart of America, and the old ones are bleeding. So many barns, so little time”. – RF Kroeger